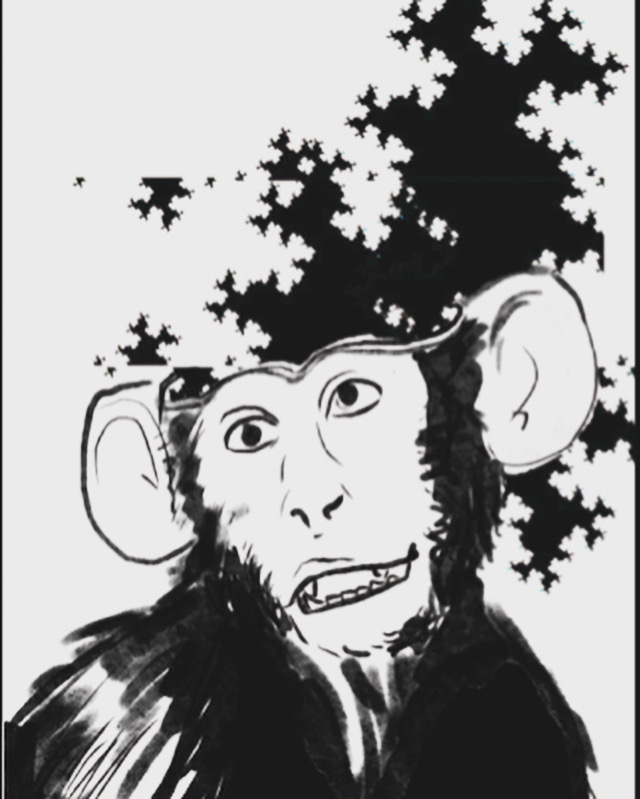 An excerpt from Judgment Day & Other White Lies. Now availble for preorder from Madville Publishing!

“Before the beginning of everything, and by everything, I mean before humans were around to invent the beginning, so like before that, there were these apes who got pushed out of the jungle, found themselves roaming across the plains and prairies tracking and hunting this prehistoric form of cattle who were always shitting all over the place, leaving behind massive prehistoric-sized cow patties, which were fertile ground for magic mushrooms to sprout. Anyway, these monkeys, aside from cattle, they liked to eat bugs—big slimy salty bugs—bugs who fed on the same cow shit—considered the best delicacy in what they did not yet consider a world. So while these monkeys were out hunting, they’d dig around in the cow shit harvesting bugs, unknowingly eating mushroom spores, about what we might think of as a micro-dose nowadays, anyway, point is, the new diet gave them better focus and vision. All of a sudden they’re tracking these cattle better than they ever have, they’re eating more red meat, they’re eating more shitbugs, and also more magic mushroom spores. Eventually, this new focus helps them figure out that the mushroom spores are responsible for their progress, so to speak, and not the shitbugs. Then they figure out that the spores grow into mushrooms, which have a more potent effect, so now they’re looking for mushrooms first and shitbugs second, which means they’re hunting way better than before, they’re eating even more red meat, and the combination of extra psilocybin and complex proteins has them all kinds of aroused. Basically, these monkeys, they just start fucking like crazy, all over the prairie. It’s hunt by day, orgy by night, all just humping each other, male, female, doesn’t matter which is which, one ape to another, to another, to another, finding all sorts of ways that bodies fit together, rubbing, licking, sucking, probing, no partners, they were having a singular experience, rampant group sex or pack masturbation, however you want to figure.

“So they start having more offspring with more genetic variation, and this singular pack grows larger and creates even better hunters who can find even more mushrooms. Soon after, they’re eating what would seem like excessive amounts of mushrooms, and they’re noticing the stars in the sky for the first time—since before the mushrooms the sky felt more like something worth ignoring in the background, like wallpaper or whatever—anyway, one day, they’re on this trip and there’s this big other thing out there in that starry sky, this thing breathing at them, and they realize they’ve been this little pack of apes on this little piece of land hunting and fucking without any awareness of the vast space and time they now know they’re a part of. So one looks at another with this huge grin, because he can’t think of why he hasn’t thought of it before, and he wants to tell her about everything and nothing all at the same time, about self and other, about life and death, about man and woman, but all he can say is, ‘Holy shit, I’m so fucked up,’ to which she replies, ‘Yeah, me too,’ because she can understand what he means even though he hasn’t said it yet, and they laugh a great laugh and hear difference there, and all of this was actually way more revelatory than it seems because it was the first time anyone had a conversation. So now they’re communicating, and they’re not apes anymore but some form of early apepeople, and they develop more language and they keep eating those mushrooms and they start telling stories about their trips, and they start calling that big other thing God, and they become some other civilization that sees how alone they are in what they now call the world, separated from that singular pack by form and distance. So now these apepeople start organizing into the societies that will become humanity, telling each other similar stories that are also different, and some of them write those stories down for those who come after, and some who come after model their stories off of those that were written down before, anyway, point is, now we’re all living by these mythologies that are really nothing more than increasingly complex versions of those first descriptions of the hallucinations of a bunch of violent, sex-crazed, stoned monkeys.”

“Some story you got there.”

“What else should I say?”

“A lot of our ideas still seem to come from violent, sex-crazed, stoned monkeys. I mean, look at who we elected president. Anyway, I’m not sure the story’s right or anything, but I will say the theory behind it seems to support the reality that we’re programmed to gain more instantaneous and intense pleasure from fucking and getting high than we do from anything else, and maybe it’s because, at the core of everything, in more ways than just the obvious, it’s where we really do come from.”

“Seems kind of full of shit to me.”

“Terrance McKenna. You know, the druggie pseudo-scientist in that documentary we watched?”

“Yeah, that guy. He’s as full of shit as those apes of his.”

“We all are. That’s his whole point. That full-of-shitness has a directly proportional relationship to the desire to tell stories. That we’re all just making it all up as we go along, hoping we’ll be better people if we just get into a better diet, or a better set of habits, or some kinky sex thing, or whatever. That when it really boils down to it, evolution is just a spore creating the fungus of progress, feeding itself on a steaming pile of excess, ever-becoming history’s paradoxically both finished and unfinished product.”

This site uses Akismet to reduce spam. Learn how your comment data is processed.